With so many Indian restaurants in New York City, it’s easy to think that they’re all the same, especially if you don’t frequent them often. That is the biggest mistake you’ll ever make (and frankly a huge insult), because Indian fare is as diversified as Texan vs. Californian food. Rahi is here to set the record straight, then totally re-blur the lines by modernizing its menu instead of staying with tradition. Are you ready for a wild ride?

Rahi, which means “traveler” in Hindi, sets out to be the neighbourhood artisanal Indian restaurant that not only teaches you about Indian food, but allows you to see it in the context of local New York ingredients. My guest and I were extremely excited to try this place, considering how many Indian restaurants we’ve been to, and immediately came upon a clean, elegant restaurant on a quiet side street in the village. Wood tables and rustic light bulbs against the white exposed brick and ambient vibe set the tone for an understated, yet exciting, evening.

Our host, who swiftly brought over glasses of prosecco, welcomed us warmly and asked if we’d be comfortable letting them take the lead on menu selection. Though the menu itself is vibrant and just extensive enough to want to choose nearly everything from, we agreed.

Just as we were done sipping our prosecco, the first round came out like a shot. First, Kheera on the rocks ($13), which was accompanied by grilled cucumber, greek yogurt and dehydrated pineapple and was totally refreshing. Then, the Chettinad octopus ($21) with a coconut-turmeric mousse, crisps and lime gremolata. The octopus was tender and spiced nicely by the mousse. Finally, the Madrasi egg roast ($14), which was comprised of an egg yolk, onion-tomato mousse, chilli oil and maple, was light and creamy — the best way to end the first round.

Just as soon as the first round ended, new silverware and dishware were brought over and the mains came in. Accompanied by fluffy naan, of course, we found ourselves deep in the banana leaf chicken ($25), which is a bone-in chicken leg with Basmati rice and coconut curry, and the charcoal-smoked salmon ($26) with coriander korma, micro spinach, mustard seeds and ginger. Both dishes were full of flavour because they were either cooked low-and-slow or smoked, but both were fairly light, also. We didn’t feel super full, which came in handy when we reached dessert.

We were brought a few special items: cheesecake yogurt and coconut cream-stuffed donuts, which we devoured in a matter of seconds.

After a great conversation with our host about the importance of diversified Indian food in New York, we were on our way out. Though the experience was brief, it was enough to make us want to come back for more. Rahi isn’t traditional by any means, but you’ll make it a tradition of your own to come back time and time again to this trendsetting restaurant. 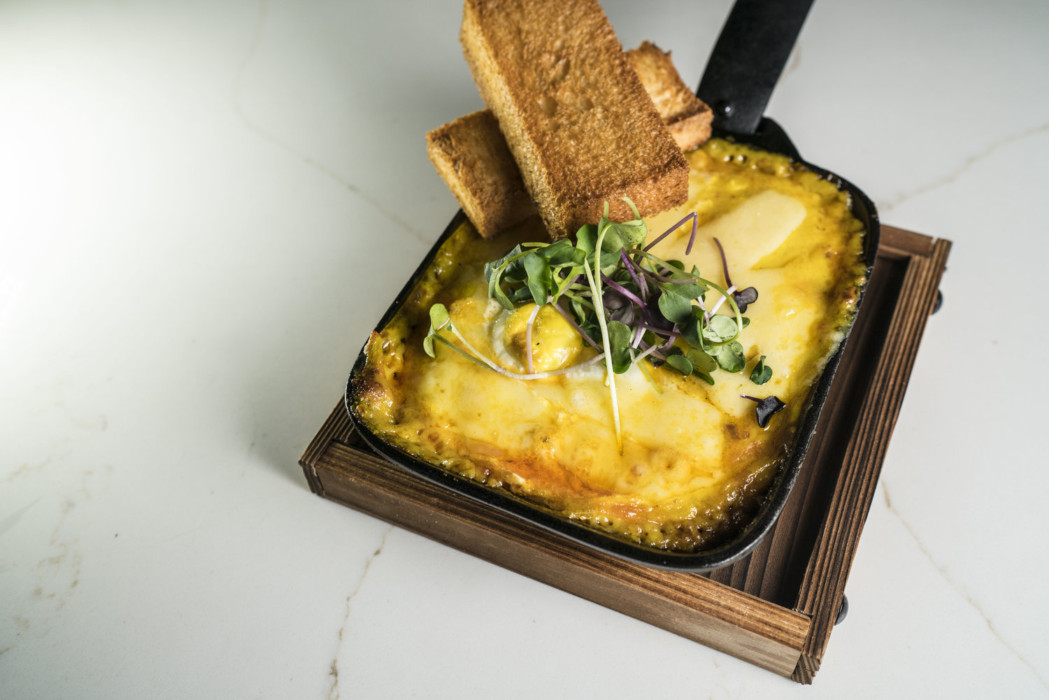