If you want American food in New York City, you don’t exactly have to go far. The choice range has no limits, and yet when you hit that barbecue place that swears they’ve got the best honey bourbon wing sauce ever, there’s something deeply disappointing to find that the place is all talk. There is — to my knowledge — one American restaurant that only lets its food do the talking. That place…is Alice’s Arbor.

Alice’s Arbor is a seasonal farm-to-table restaurant that prides itself on creating ultra-flavourful American dishes using minimal ingredients. I was a bit surprised to find the restaurant propped up on such a busy street in deep Brooklyn, but then I thought, eh, how much more New York-American could this get, though? The restaurant, which was totally open to the outside on one wall, had exposed brick and mirrors everywhere with vines entwining each corner. Very low-key and intimate, its vibe is nothing short of rustic and honest.

My guest and I were greeted by our host, who seated us outside. After getting our menus, we and our host were immediately chatting about the swiftness with which the bartender was shaking, stirring and pouring the cocktails. Our host let us know that he was truly one of the best, with which I replied, “Then I’ll take an Old Fashioned ($12).” For my guest? House white wine ($8).

The menu, as expected, is clean and not too extensive. We gave one look over and knew what we wanted for starters — the kale salad ($11) and the crab cakes ($12). After ordering, we sipped our spirits, mine being by far one of the best Old Fashioneds out there, and my guest’s being a perfectly crisp and refreshing white wine.

When the appetizers came, we were absolutely starving. Thankfully, the portions were no joke. The kale salad, which had pecorino cheese, apples, avocado, roasted almonds, gooseberries and a fig vinaigrette, was so good and tart, we were scraping the plate for leftover flavour. Since when does anyone do that with a salad? The crab cake was a slightly spicy and hearty choice since it was a jumbo lump cake nicely on top of a coriander curry sauce.

Next, the mains. It’s a bit hard to ignore ribs at an American restaurant, so we had to choose the Carolina-style baby back ribs ($20), served with potato salad, and the red snapper ($22). When the ribs arrived, we had no reservations getting our hands dirty. They were dry-rubbed, yet totally juicy, while the potato salad was a nice, mild accompaniment. The snapper, on the other hand, was perfectly crisped on top and super simple.

We were just about tapped out when the bartender himself came out and offered to make us totally unique drinks that weren’t on the menu, if we were willing to experiment. Of course, we said yes. Within five minutes he returned with what looked like an ice pop, because that’s exactly what it was. Bourbon and frozen bitters combined to make a boozy frozen treat, and we’d devoured that in a minute flat.

That really wasn’t all. Like a true American restaurant, they weren’t going to be satisfied until we were totally stuffed. For dessert, they chose for us the white peach tart with chai creme anglaise (so new that it’s not even on the menu yet) and Chef Mike’s grandmother cheesecake ($8) with graham cracker crust and raspberry coulis. The tart was an incredible balance of sweet and spicy while the cheesecake gave us all the comfort we probably didn’t need at that point.

As far as American restaurants go, Alice’s Arbor doesn’t get much more authentic. What makes it great, though, isn’t that it has to scream from the rooftops that it’s got the best damn Carolina ribs in the world. They just have to put them on a plate for you to know that you’re getting something special. 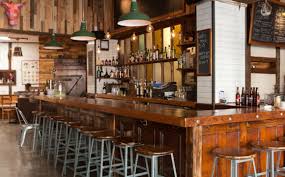 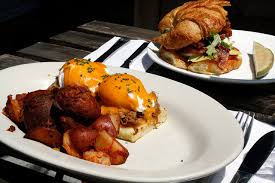